My wife and I live at the edge of a housing estate in Dousland, near Yelverton, west Devon.  The garden (excluding the house and garage) is about 400 m2.  The field across the road is bordered, fortunately, by quite a good hedge.  The elevation is 210 m, and Dartmoor is about 500 m away.

We have been living there since late 2010, arriving from Australia, where I had lived all my life, and my wife for most of her adult life.  We love wild plants, and grew the local native species in our Australian garden. We set out to do the same when we came to live in Devon.

Our chief priorities for our garden were the local native plants and the invertebrates they support.  We kept three native trees (rowan and hawthorn), a few square metres of lawn (in which we’re encouraging wild plants to grow), and a well established non-native hedge along our western boundary.

We got rid of everything else, leaving much bare ground to be colonized by wild plants.

To create varied habitat for wildlife, we provided the following features:

Some small native trees, some of which we may later train into a hedge

A section of drystone wall, with an earth core (for colonization by plants)

Gaps along our boundary (to allow the movement of frogs, newts, hedgehogs, etc.)

Portions of meadow, in the sunniest parts

We planted some plug-plants of species such as bird’s-foot trefoil, meadowsweet, betony and stitchwort, and seeded the garden with dock.  But the great majority of the species we have were either already there or arrived by themselves.  Some appeared almost immediately, including herb robert, wood avens, white clover and self-heal.

For the first four years we left the garden to develop in its own way (as we had done in Australia).  It therefore gradually became more grassy.  On advice from friends, we (a) planted yellow rattle (in autumn 2014, following instructions on the Web), and (b) cut the meadow areas thereafter in late winter and early autumn.

The yellow rattle germinated, grew and seeded itself well, and over the next three years we helped it spread to every suitably sunny spot.  Each summer it produces more than ample seed, some of which we collect, mostly to give to friends.  It certainly suppresses the garden’s grasses for some months each year, allowing many flowery plants to thrive, and probably helping the colonization of some additional species, such as agrimony and ribwort plantain.

Among the species doing very well in the meadow parts of the garden are primrose, violet, dandelion and its relatives, knapweed, ribwort plantain, betony, medick, red clover, white clover and bird’s-foot trefoil.  In the shadier parts of the garden, species such as stitchwort, red campion and enchanter’s nightshade are doing well.  And species such as meadowsweet, angelica, great willowherb and hemp agrimony defy their characterization as wetland plants and thrive here in all sorts of places!

We enjoy the many different insects we see.  Bees of various sorts are prominent, finding pollen and nectar throughout the spring, summer and autumn, as different plants come into flower.

Our commonest breeding damselflies are the azure and the large red; dragonflies are less consistent.  We need to keep enough long grass for the grass-breeding species of butterfly, such as the meadow brown, gatekeeper, speckled wood, the small and large skippers — and the ringlet.  Hardly seen in the garden until grasses became well established, ringlets are now abundant.  We have set up a moth-trap only once, on the night of 13th June 2018, when 48 species were caught, including the spectacular elephant hawkmoth and small elephant hawkmoth.

Our main birds are a group of sparrows that come to feeders, bathe in the pond and hunt newly emerged damselflies!  Goldfinches eat the seeds of dandelion, knapweed and thistles.  Other common birds such as robins, dunnocks and blackbirds make some use of our garden in their daily rounds.  Mammals such as the hedgehog, fieldmouse (wood mouse), common and pygmy shrew are occasionally sighted.

Last year we doubled the size of our garden by buying an adjoining vacant block of 500 m2.  About half the area had long been leased by our neighbours for growing flowers and vegetables, but the rest we shall devote to wild plants and wildlife.  On low-fertility topsoil spread over part of the area (to make up the level after some derelict garages were removed), 70 species of wild plant germinated, including archaeophytes such as field pansy and the splendid bristly oxtongue; it will be interesting to see whether they persist. 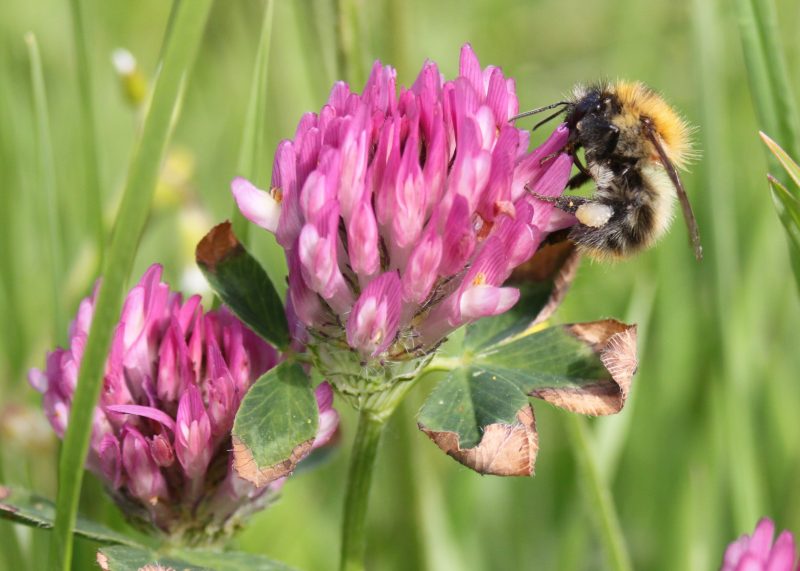 A smallholding with a late summer species-rich meadow, used by ewes and lambs and much other wildlife.